Stormwater run-off from construction sites is a significant, and frequently underestimated, source of pollution. Activities, such as clearing, grading, and excavating, disturb or expose soil leaving it highly susceptible to weather erosion for prolonged periods.

This surface erosion is often more than 150 times greater than before works began, with sediment run-off rates typically 10 to 20 times greater than those from agricultural lands, for example. Consequently, during a short period of time, building sites can contribute more sediment to waterways and drainage systems than would normally be deposited over several decades.

This not only results in increased public spending on activities such as stormwater sewer maintenance and dredging of waterways, but the deposited silt particles (which may be tainted by construction site pollutants) can also cause serious environmental harm to aquatic habitats.

Within the UK, such construction site stormwater run-off has remained one of the largest unaddressed non-point sources of pollution. However, with the advent of demanding new environmental legislation called the "Water Framework Directive", which has recently become UK law, policies must be developed to improve water quality by controlling pollutants in surface water (For further information on this new directive visit the defra web site).

It is therefore important for environmental consultants, and groundwork contractors, to establish project sediment control plans to protect surrounding watercourses and avoid incurring significant financial penalties.
Fortunately, we can take advantage of well establish procedures already developed in other countries, where contractors often have to submit sediment control plans to the local authorities before any construction permit is issued.

Such plans include a variety of common sense "best management practices" which include: maintaining grass strips, not removing vegetation until necessary, protecting and promoting vegetation restoration on areas immediately they are complete, covering stockpiled materials and using silt fences, silt traps, settlement ponds and inlet filters. 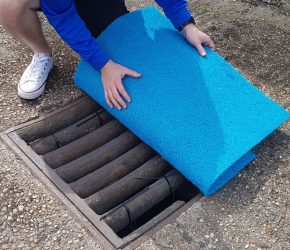 Straw bales can be placed downstream of works to act as a barrier and may help trap suspended sediment while allowing the water to pass through the bales.

Pro-Tex™ Floating Silt Curtains, otherwise known as silt nets or turbidity curtains are manufactured using a range of geotextile and PVC materials and are available in a range of sizes depending on the site requirements.

Ultra Dewatering Bags provide an effective way to collect harmful sediments from dirty water pumped out of excavation works that would otherwise pollute the surrounding environment.