They are a simple, yet effective, biodegradable matting, which are fixed to the stream bed, and do not impede water flow.

Our Sedimat™ is an effective tool for the protection of streams from sedimentation damage during in stream construction activities such as utility installation, culvert replacements, ditch maintenance, and bridge work.

It is a flat 1.20 x 3.00m pad which is laid singly or in multiples on the streambed immediately downstream of the worksite.

Sediment disturbed by construction is carried along the streambed by the current until it encounters our Sedimat™. The sediment then settles through the upper layer of jute mesh and into a layer of wood wool. A lower layer of hessian prevents the sediment from escaping. After construction is complete, the mats are removed and can be staked to the stream bank and seeded to provide immediate stream bank stabilisation - because the mats are entirely biodegradable there is no need for disposal. The sediment mixed with the rotting wood wool provides a seedbed for germination and growth of the seed mix.

Our Sedimat™ is packaged individually and is easy to store, handle and transport. It can be installed on a streambed using either stones or stakes and can be placed in any configuration or number to provide desired coverage. It may be used alone or in conjunction with other methods of stream protection such as coffer dams, culverts or silt screen.

Our Sedimat™ was developed and tested under field conditions at eight different streams in central and western New York State during 1992. The amount of fine sediment (sand, silt and clay) in the streambed immediately downstream from the work sites was measured before and after the construction. At seven of the sites, the disturbance was the excavation of a 4 feet deep trench for the installation of a natural gas pipeline which was followed immediately by backfilling. At the eighth site the disturbance was extensive hand digging by shovel. These streams varied in width from 10 to 75 feet and in depth from 6 to 24 inches. Velocities ranged from 0.8 to 3.3 feet per second. Trout were present in most of the watersheds, if not at the test sites specifically. Before construction, the average percent of sediment fines in the streambed just downstream of the work site was 12.2%.

After construction, it rose slightly to 14.7%. Both concentrations of sediment represent levels conducive to trout reproduction (egg survival). In contrast, there were locations at six test streams that were subject to the disturbance but which were not protected by the mats. These were primarily areas between the edge of the trench and the upstream edge of the mats, or off to a side where mats were purposely not laid. After construction, the average percent of sediment fines at these unprotected sites rose from 11.5% to 24%. This post construction level of sedimentation is an amount which has been repeatedly documented to cause major declines in trout reproductive success. A comparison of the two before and after sediment concentrations indicates the mats trapped about 80% of the disturbed sediment and prevented or minimised adverse impact to trout reproduction.

Individual mats were able to trap and remove approx 250kg of sediment each and did not interfere with construction operations, because they were laid flat on the streambed - they were not affected by water velocity, nor did they raise water levels and thus flood the work area.

Since it’s UK launch in 1996 by Hy-Tex (UK) Limited, our Sedimat™ has been used extensively throughout the country on a diverse range of projects; continually demonstrating the benefits of this unique, patented, product as a valuable tool for stream pollution protection due to its’ low cost, simplicity, versatility and effectiveness. 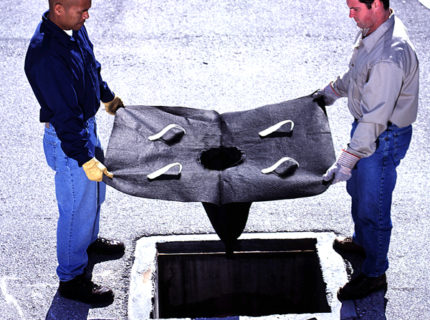 Ultra Dewatering Bags provide an effective way to collect harmful sediments from dirty water pumped out of excavation works that would otherwise pollute the surrounding environment.

We supply two types of fully biodegradable pegs, the BioPeg™, which is made from PLA; and our WoodPeg timber “T” peg.